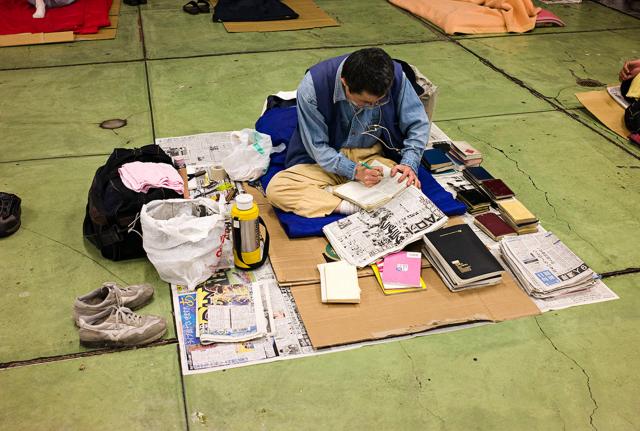 There are instruments for measuring or examining anything. Selenoscopes view the moon. Serimeters test the quality of silk. Topophones determine the direction and distance of a fog horn. Xanthometers measure the color of sea or lake water. A chromatoptometer measure’s the eyes’ sensitivity to color and I have learned to lean into grey most of the time. With a megameter I could determine longitude by observing stars.

Physicists have discovered in recent years a way to ‘squeeze light’ by combining photons to create a triphoton and state of polarization that then applies itself to highly precise measurement. More accurate than laser beams, quantum light waves have the potential to track and measure small distances or objects still or moving, and its scientific implications are tremendous. In my world, light spilling across my hand or my daughter’s face, dripping off the edges--I can’t grasp or evaluate its signature, and thus it remains an intangible quantifier of dimension, more mood-evoking than a tool of evidence.

I think about photography and its obvious technical scaffolding, but still ever-reliance on the uncalculable documenting of humanism.

“I think good art illuminates something that hovers in the background. A most successful picture surprises, reveals something that was unknown to the viewer before they saw the picture. Nothing tangible...” photographer Magdalena Sole tells me.

She uses the word “witness” both in her artist statement, and also in conversation with me, describing her process as becoming invisible, “just standing somewhere and becoming a witness.”

“I am always drawn to people, societies that live on the margin. Mainstream bores me. Somehow when I meet communities that are marginalized I feel a kinship and excitement. I feel compelled to show their beauty, their suffering, their resilience. Perhaps they are my heroes. This happened in the Delta, but also in Japan after the great Tsunami struck and people who were leading normal lives were suddenly catapulted to the margins and to an existence where everything past was lost.”

I’ve always found that the most authentic work is rooted somewhere in the story of the artist themselves. The details don’t necessarily need to be known by the audience or even the artist, but they’re evidenced in another one of those intangibles, the layers of dimension simply felt when one looks at a body of work that resonates history and self. Magdalena tells me, “There have been many moments that cracked my world open, each time the crack would become a bit larger. The first one I remember was when my family left from Spain to Switzerland in the middle of the night. I was 6 years old. It left me with a sense of homelessness. That was only the first crack. It taught me about living on the margins.”

As is typical of Sole’s work, the images are honest, and she captures a broad spectrum of what it means to live daily life, homeless or not. She tells me about simply trying to “observe life, as is.”

She continues, “The neighborhood is marred by homelessness, poverty and declining health. Osaka residents shun the area. Kamagasaki’s ecosystem hosts 60 Yakuza syndicates who deal drugs, run gambling and prey on welfare recipients. As forlorn as Kamagasaki might seem, men living in cardboard boxes arrange their shoes as if at a fine inn. Every evening they head to the public bathhouse. Though outcasts, these men project the core values and vitality of a polite, respectful, highly organized Japanese society.”

Tonight my kids and I will go watch the swifts dive into the chimney of a school in northwest Portland. Each night in September an hour before sunset anywhere between 1,700 and 35,000 birds gauge the sky for light and in perfect synchronicity with sun and moon and day and night thread the sky from miles around to their roosting post until morning. Since the 1980s when their natural habitat of old growth Douglas Fir trees diminished, the school is on their migratory route towards Central and South America. I wonder about the light-measuring rulers inside their teency brains and hearts that align to such precision day in, day out, each and every year.

City-dwellers set up picnic blankets and eat sandwiches on the school lawn and watch, all of us, heads turned up to the sky. The dignity of lining up shoes or books on a cardboard floor is not maneuverable by statistics, and neither is the sky. Data of diminishing brightness and color informs of tangible implications of visibility impact, but it cannot explore or implicate the emotional tethers created when one’s head is thrown back and for a second or two, we just look--at each other, or at light, or at birds. In those moments, a day is contained with clouds, or color, or a stippling of the sky by thousands of swifts, with all that remains steadily and constantly there.