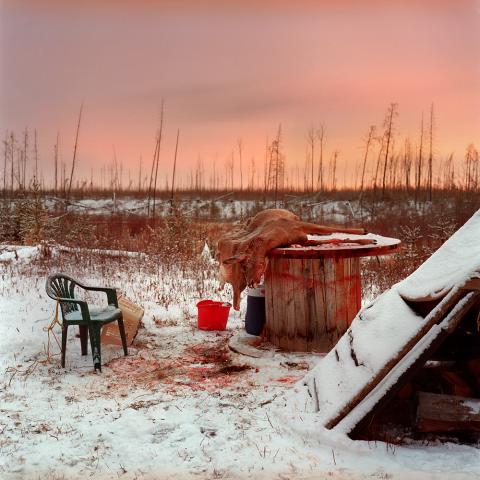 Sometimes it’s called “Aboriginal possession,” or “Indian title,” the historic right for Natives to use and occupy the land of their ancestors--and this includes trapping without interference. Traplines are areas where this right to trap fur-bearing animals is upheld. And if industry uses traditional lands, the person holding the trapping rights is often compensated.

The Athabasca oil sands in northern Alberta, Canada, are the second largest oil reserves in the world next to Saudi Arabia. The First Nations Reserve of Fort McKay is surrounded on all sides by oil extraction plants, a sharp-edged and disparate juxtaposition from as recently as 40 years ago, when no roads led to or from the region. In the 1960s, the Cree and Dene people lived off the land, and had no running water. Traditionally, they’d used tar sands to waterproof their canoes. Today, the Fort McKay Group of Companies (formed in 1986 by the native people to provide oil industry services) earns over $100 million annually from oil company business contracts and employment. Individuals are compensated directly for trapline use, and the group as a whole if reserve land is used or compromised.

A space exists between that past and this present. And it is there that photographer Aaron Vincent Elkaim looks. The 2012 Daylight Magazine Photo Award winner spent four months living with the indigenous people of Fort McKay, exploring the blurring lines of oil industry partnership and economic prosperity, that at times work against age-old land traditions and values.

“There is this notion that Native people have a cultural and spiritual tendency to be stewards to the land. In McKay they are profiting off of its destruction. I knew the story had to be complicated, so I just gave it time to be revealed,” Elkaim tells me.

It is his patience that allowed an astounding level of depth and complexity to be shown in his project Fort McKay: Sleeping with the Devil. “I knew landscape would be a big part of the project, but I had no idea how the reportage would play out, or the access I would get. I just trusted my intuition that there was an important story here and that it would hopefully be revealed to me. So it was much more a process of discovery than knowing what the story was and trying to photograph it,” he continues.

“Before being accepted into the community I spent two weeks sleeping in a camper trailer I had towed up there and parked just past the reserve. I had found it extremely difficult to meet anybody, and get traction within the community, as there were no local hangouts. I just wandered the streets getting glared at mostly...Luckily before long someone followed me back to my trailer one morning in a very threatening way (he saw my out of town plates and thought I may have been a drug dealer). I introduced myself to him; before I knew it I was living with his mother where I spent the next four months.”

The first exploratory oil processing of the area goes back to the 1930s, and by the late 1970s the second major oil sands plant was completed. In 1982 the Fort McKay First Nation blocked the access road in protest for not having enough voice or benefit from the burgeoning industry. They were offered a water treatment plant by the provincial government and several years later formed a holding company to manage their involvement and profits.

“In a country where the norm for Native reserves is high poverty, unemployment and dismal housing, Fort McKay is marketed as a success story, but the people here know the truth is much more complicated and as their land and culture deteriorate there is little faith much will remain for future generations,” Elkaim says.

“It might be part of the human condition, an aspect of our ego. Right now we are in the dogma of Nationalistic Capitalism, and we are most certainly destroying each other and even ourselves to protect it. Fort McKay was an interesting experience in shaping my perspective in regards to this. It is a place where historically the people lived off of the land and each other. Their belief was to care for one another and Mother Earth and in turn Mother Earth would care for them and their future generations. Of course that life would have always been a struggle. Today they have all the comforts of the modern world, but when asked about the future of their great-grandchildren they wonder what they will have if they cannot drink the water, pick berries, eat fish, or hunt moose. The disrespect for Mother Earth has sealed the fate for future generations and they very are aware of this. Their awareness gives me hope that maybe things can change.”

There’s an edge to survival. What happens when needs are met spiritually but not tangibly in a food/shelter/resources sort of way? Elkaim’s images are without judgement. His unique ability to pan wide and to look hard, to look with hope, to look with regret and sadness, to look with belief, is singular. Survival depends on an enmeshment of factors within our control and out of our control. Sometimes there’s a rip in the net. Sometimes the line goes slack. Sometimes the current pulls so hard the line breaks. What happens then? Elkaim asks all these questions and more in his photographs. The reconciliation between right and wrong, between looking honestly at the surrounding factors over which you have no control, and then trying to exert some control over them--these are questions of survival.

As a photographer, Elkaim particularly honors process, and this project deftly manages a multiplicity of themes and content threads by following through on his ideas, listening to his gut, and keeping his eyes open for what finds him. He tells me about not knowing how specifically the project would play itself out, about trusting fate and coincidence.

“I found I simply had to let go of trying to construct the story and simply had to wait for it to be revealed to me. Sometimes I wouldn’t take a decent picture for a week or more. Being in a small community for so long there was so much repetition. As a photographer you’re always looking for something new to catch your eye to add to the story, but I found that I was often repeating the same steps with people and scenarios. Really I was just hanging out, but in doing so I began to understand the community and the story, and through that process I gained trust. That trust led to photographs, and my understanding gave me the ability to realize the symbolism in the pictures that appeared before me. The time also allowed for synchronicities to happen, for that one shot and situation to materialize often when it was least expected.”

He discusses his process further, “Shooting film was also a different experience for me. Not being able to edit on the go allowed me to stay in the moment. It kept me from trying to construct the story with the images I had already taken, going to my laptop and disconnecting from my surroundings. I think that was very important. It was difficult to know when it was time to go, or to even know what I had! So I decided to just trust my gut that I would know when it was time to leave.”

“What I love about photography and what keeps me practicing is the freedom it provides to explore and interact with the world. Its a spiritual experience for me, you have this intention to understand and tell a story, then one random thing leads to the next and at the end you walk away with this body of work and experience that you could have never fully foreseen, where that leads you next is always unknown as well…The documentary photographer is looking to communicate a story, but before that he is looking to be informed himself.”

“There is this idea that photography can change the world. I believe that is true, but I don’t think we should expect to perceive that change. We just have to have faith that our work does contribute to it.”

To view Daylight’s multimedia piece on this project, see: http://daylightbooks.org/podcast/october2012