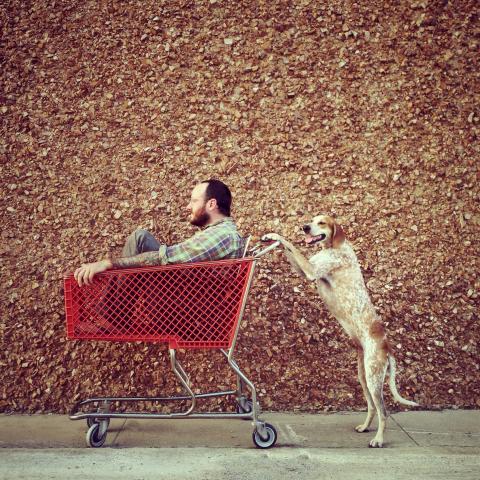 Have you ever heard a song, or read a book, or watched a movie that you wish you created? Well, to be honest, I wish I had come up with the premise behind Theron Humphrey’s This Wild Idea.  In 2011, Humphrey set out on his goal: to meet and photograph one person a day for a year.  He traversed 66,565 miles, and visited all 50 states.  Not only did he photograph his subjects and the details of their lives, he gave each person an opportunity to tell his/her story through a recorded interview which he features alongside their portraits on thiswildidea.com.  Humphrey’s earnest and classic storytelling approach, and compassionate, intimate photographs that span the entire country and its citizens have garnered international recognition and an impressive audience.

The other day, I had a chance to ask Theron a few questions  about This Wild Idea, his coonhound Maddie, and the role the Internet has played in his work.

JL: So, first off: Where are you from?

TH: I was born and raised in coastal North Carolina. It’s the sort of place you’d still see tobacco growing. I spent my childhood on my grandparents' farm and the suburbs. I still like existing in that space between city ideals and country living. 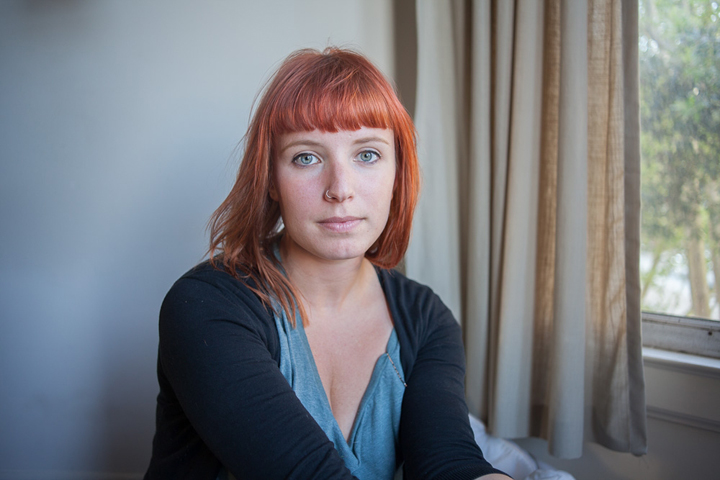 JL: And when and how did you get into photography? (Was it during the age of film?) Where did you go to school?

TH: I went to undergrad in Eastern Tennessee, in the Appalachian Mountains at a small liberal arts college you’ve probably never heard of. I went to study computer science, but along the way I fell in love with photography. It’s easy to love photography, ya know? I like that it’s somewhere in between craft and science.  Like most folks, I have fond memories of darkrooms and chemicals. But one thing that I remember about being in grad school is shooting with the Canon 20D. I remember feeling like the images were good. 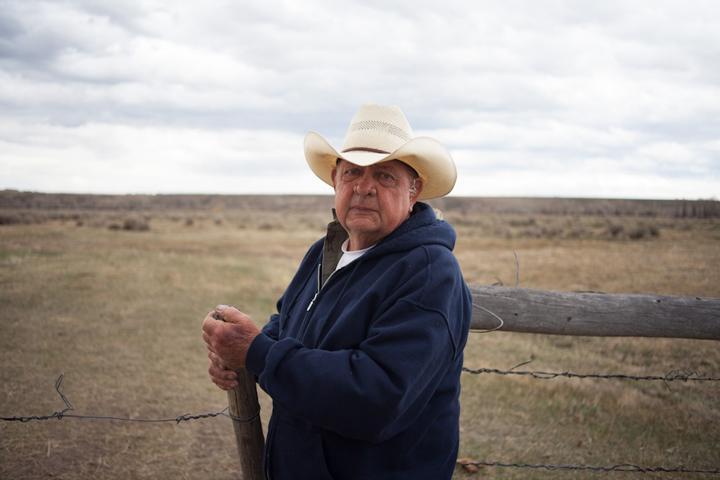 JL:    How did This Wild Idea come about?

TH: That’s a long story. I wish I could sit down with all the folks who are going to read this. I’m pretty sure I’m better at telling stories than writing them.

I have a long-winded version of the story, but 3 big things happened in my life that stirred me up to live a different story. Hopefully to live a life that looks funny to most of the world. I was burnt out on corporate life. My grandfather passed away. And I was broken hearted. Those all came together at the same time. I literally woke up one morning and said I was gonna go do something different, I wanted to create work that I could point at and say I loved. 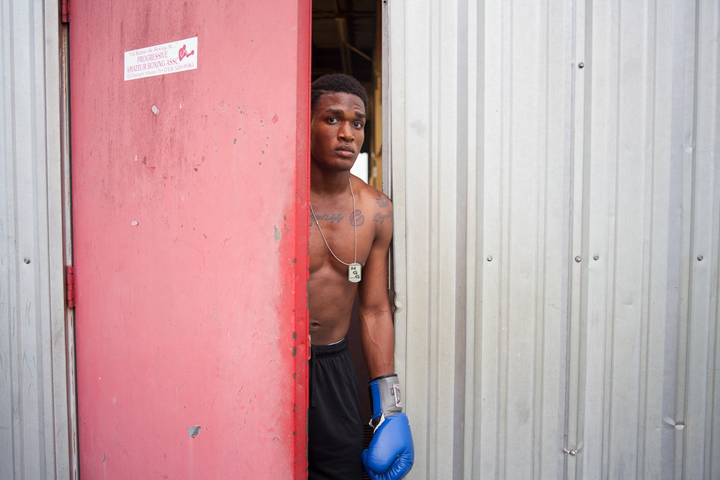 JL: When did you start This Wild Idea and how many days were you on the road?

TH: I started August 1st, 2011 and finished August 1st, 2012. I was on the road for 365 days. Meeting folks everyday. I literally used my camera every single day. There was a lot of beauty in that. And discipline.

JL: And This Wild Idea was funded entirely by donations? 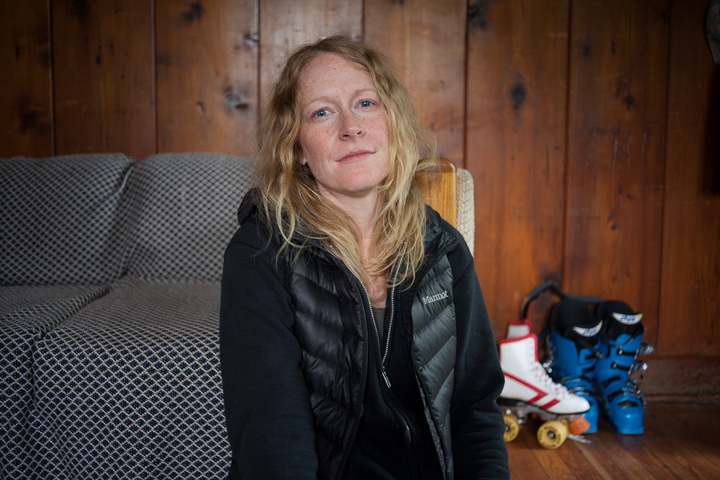 JL: You’ve been traveling with your adorable and super flexible coonhound Maddie, who is the subject of your book “Maddie On Things” which will be coming out in April 2013 under Chronicle Books.  How is it traveling with her?

TH: When I first started this project some folks asked me how I’d travel and entire year with a dog. I was nervous. I don’t have kids yet, but I think this is a good way to explain it….I figure most folks are scared about how much their life will change when they have children. How nothing will be the same. They think about the sort of stuff they will have to sacrifice. But when their first child comes into the world they wouldn’t trade it for anything. It becomes they life they know and love.

Traveling with a dog is a tiny slice of that. 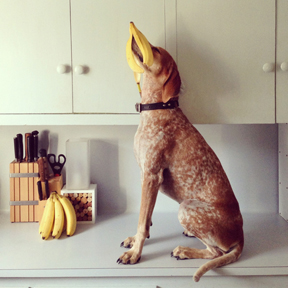 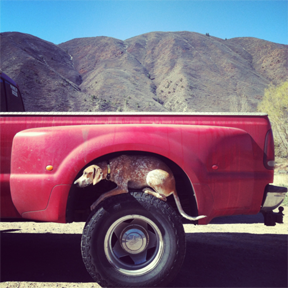 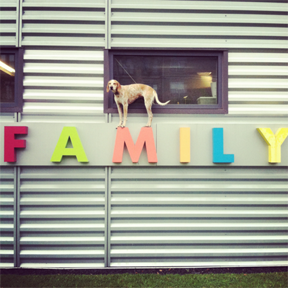 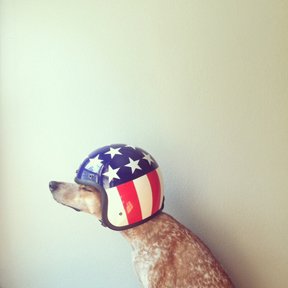 JL: What kind of gear are you shooting with?

TH: I shot This Wild Idea with a Canon 5D Mark II with a vintage Carl Zeiss 35mm f/2.8 and Zoom H4N recorder.

Images of Maddie were shot on my iPhone 4 and these days an iPhone 5.

JL: So all the images of Maddie in "Maddie on Things" were taken with an iPhone?

TH: Yep! Mobile photography is a big conversation, but I honestly felt a lot of whimsy using my iPhone this past year. 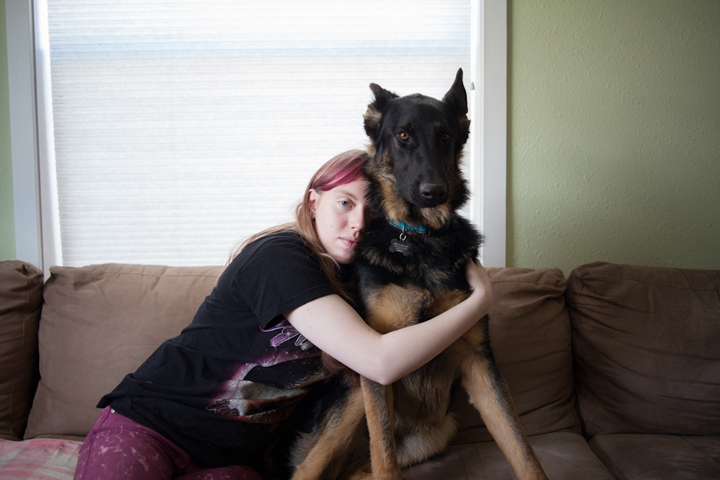 JL: How do you pick/find your subjects for This Wild Idea?

TH: About half the folks I photographed I just walked up to and said hi. I don’t know about ya’ll, but I have to swallow my gut every time I do that. I love it, but it also makes me nervous. It’s hard, at least for me. I didn’t want to travel America and just be a voyeur. I wanted to engage. I wanted to put myself out there. I found that’s how to you grow, you know, as a person and image maker.

The other half of the folks I photograph were people who ‘Change my route’. I wanted to have a project where everyone could follow along, to watch it grow, not just view it afterwards. Some of the best days were when someone changed my route go to meet their grandparents. I loved those days. 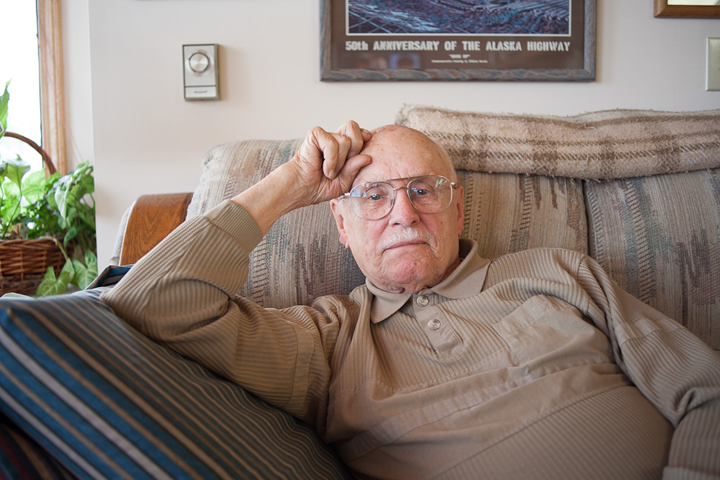 JL: One of my favorite parts about This Wild Idea is the humanitarian aspect – each person you photographed had the opportunity to tell his/her own story through their own words in their recorded interview.  You literally gave a voice to these people.  Was this one of your goals for this project?

TH: I flew in from Idaho to visit my grandfather in North Carolina in the winter of 2010. I never gave much thought to photography being a platform for story telling. Does that sound weird? I always looked at photography as a way to express some sort of intellectual idea. But there was a shift that winter. Point my camera towards my grandfather was this literal act of me loving him.

When I got back to Idaho he passed away. In a heartbeat those images became more valuable. You couldn’t go talk to him. You couldn’t take his portrait. It was a funny feeling because I loved him and I had this body of work to show my kids one day, but the world didn’t even know he existed. Does that make sense? Sort of hard to explain.

I wanted to go into the world and meet folks like my grandfather. Folks like my mom. I wanted to meet them, to celebrate their lives, their story. All of these everyday memories that make up a life. 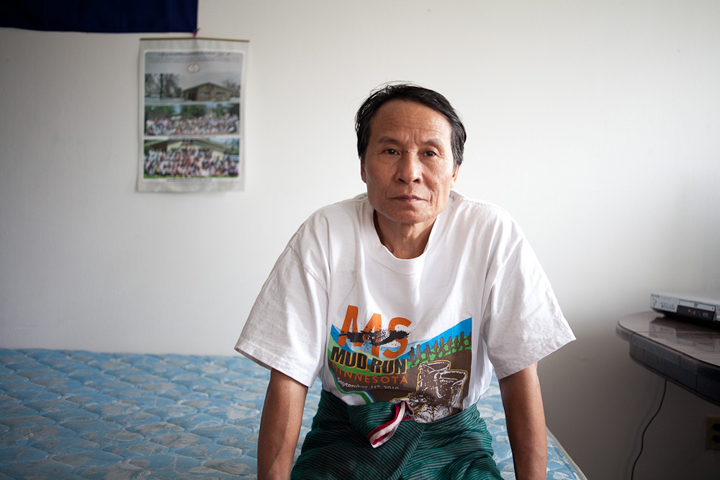 JL: And everyone’s favorite question: do you have any influences/heroes, and if so, who are they?

TH: I bet most of mine are similar to ya’lls. Robert Frank, Stephen Shore, Steinbeck. I dig the fellas who traveled America.

But more personally the project was influenced by what I love in life, what I found valuable. Sitting around with folks, learning to love my neighbor, and hearing stories.

JL: Do you have any notable on-the-road funny stories/horror stories/anecdotes?

TH: I bet I visited over 200 McDonald's. Over time, I found a lot of comfort and ritual in stopping at ‘em. Not so much to eat there, but they all have Wi-Fi these days and decent coffee for $1. The other awesome things about McDonald's, regardless of which state you’re in, there are always World War II vets hanging out there in the morning. 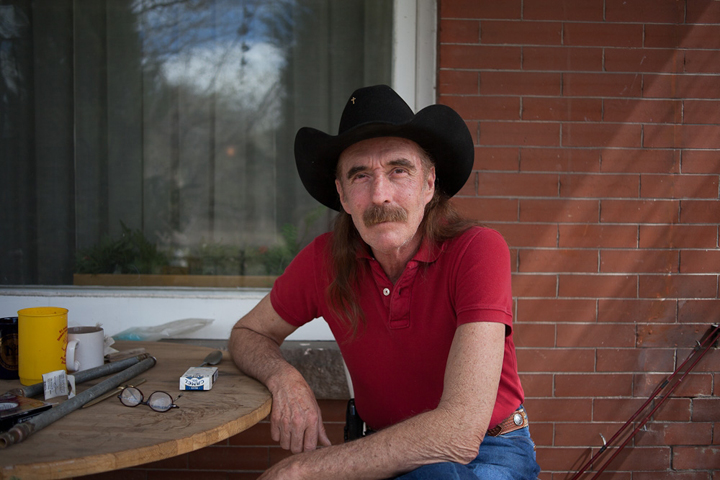 JL: And do you have any more plans for This Wild Idea? (A book, an exhibit?)

But I did apply for an artist residency at Light Work in Syracuse, NY to turn the project into a gallery exhibition and develop a new interactive audio experience. That would be a nice capstone. Maybe we can convince them to let me? 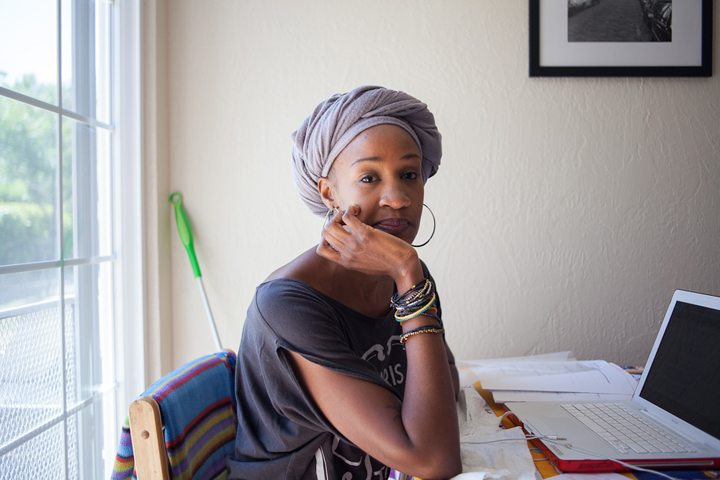 JL:  You have quite the following on Instagram with 114K followers, and This Wild Idea is exhibited solely on the Internet (right now).  Do you have any remarks or thoughts on the role of the Internet/social networking and photography today? How has it benefited you, and has it ever worked to your detriment?

TH: This is the biggest audience I’ve ever had. Most days it blows my mind. I have 114,000+ Instagram followers, 35,000+ Tumblr followers and 7,500 Facebook fans just for This Wild Idea. It’s amazing and troublesome and daunting. It’s all of those things.

Ultimately I’m grateful. It’s such a blessing to be able to share what I love with such a large audience. Well, a large audience for someone like me. These days I’m just trying to remember that it’s about the work we create, the story we leave behind, not the platform we share through. Intsagram and Twitter and Tumblr will come and go, but if we love each other in our communities. You know, your literal next door neighbor, then we’ll be successful. 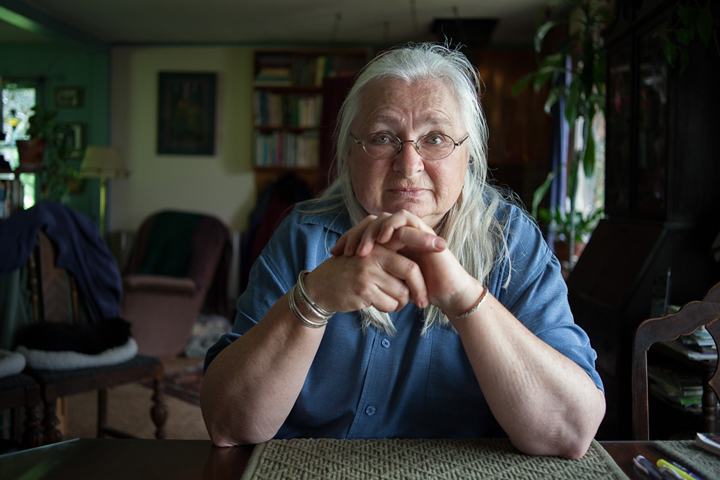 JL: Are there any other projects coming up that we should know about?

TH: In the spring I’m hitting the road again to do a 48-state book tour with Maddie! It’s going just be a ton of fun. Literally. I’m looking forward to traveling again, but with more whimsy.

JL: And finally, what advice would you give young people (photographers) today?

TH: I woke up one morning and realized I’d just have to make way less money in life if I wanted to wake up each day and take images of what I loved. I found peace in it. You know, not making much money. It’s hard to explain how precious that is until you go through photo school and end up shooting product photography. 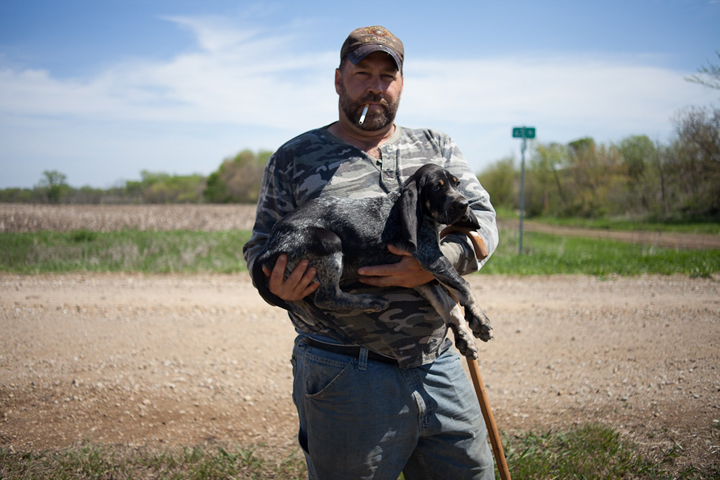 More of Theron's work can be found here:

With the exception of the first image of Theron by Cory Staudacher, all photos included by Theron Humphrey.