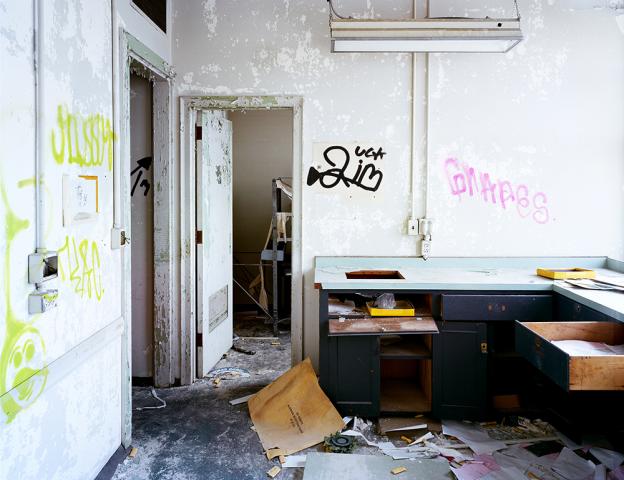 Ironically enough, it was way back in 1951, an era clearly immersed in film, that Berenice Abbott wrote, “In fact, the photographic medium is standing at its own crossroads of history, possibly at the end of its first major cycle. A decision as to which direction it shall take is necessary, and a new chapter in photography is being made...” She was referring of course to photography’s place amidst the rise of multiple visual mediums--television, film, magazines. But the points she addresses in her iconic “Photography at the Crossroads” article are as relevant as ever, today.

It’s not that Canadian photographer, Robert Burley, is any stranger to the digital realm of photography’s new voice. He recently completed an exhibition of digital prints from a comprehensive architectural survey project of Toronto’s first synagogues that also included a virtual exhibition in collaboration with the Ontario Jewish Archives. He has also manipulated imagery on a digital platform for other work. But his new book, “Disappearance of Darkness,” is an homage, a direct look, at the demise of the very thing that used to hold pictures: film.

“Over the last decade, the medium of photography, my life’s work, has been utterly transformed, radically and irrevocably...It is now clear that the dark, chemical, and physical photography that I knew in the first part of my life, will not survive into the next. My own experience with making photographs, one that involved not only seeing, but also touching, smelling, and navigating my way around dark rooms with trays of chemical baths and “safe” lights is all but gone,” Burley states.

“To chart a course, one must have a direction,” Abbott continued in her essay. The direction is clear, photography is, as Burley reflects in his book’s subtitle, ‘at the end of an analog era.’

The book is comprehensive, addressing many angles of the photography world as it once was--interiors of darkrooms, exteriors of photo studios, a suite of images documenting the demolition of the Kodak-Pathé building GL in Chalon-sur-Saône, parts of the Eastman Kodak campus in Rochester, New York, sites of significance to the industry such as Afga in Belgium, abandoned Polaroid buildings in Waltham, Massachusetts, a rusted out Ilford Paper cargo container outside the paper finishing building of the company headquarters in the UK--all iconic names, representing a once flourishing industry.

And staying conceptually consistent, Burley produced all the images in the book using traditional methods. The photographs were created with a Toyo 45A Field Camera using a 90mm Sinar Sinaron, f/4.5 lens, a 180mm Horseman Topcor, f/5.6 lens, and a 210mm Sinar Sinaron S, f/5.6 lens. Three different types of chromogenic negative 4" x 5" sheet film were used to make the images: Kodak Portra NC 160, Kodak Portra VC 160, and Fujicolor NPL 160. Polaroid Type 55 black and white positive/negative film was used as a test fim to determine proper exposure and focus. At the end of the project in 2011, only Kodak Portra 160 (a newer version of the Portra NC 160 and VC 160 films) remained on the market.

The project as a whole prompts another layer of questions around the more intangible, but arguably most important, components of image-making. If the tools have changed--considerably and irreconcilably--does that mean the images have, or have to, as well? How directly is process linked to content? How does technology dovetail, affect, and influence the art and story of photograph?

Burley weighs in on this. “I believe the intention (heart and mind) are always most important and ultimately what we see in any artist’s work regardless of technology they used to create it.  However, just to play devil’s advocate, let’s look at another artist living at the turn of the last century who lived through a time of remarkable change – Edward Steichen.

Which images were the ones that truly expressed his heart and mind – was it the paintings he did while living in Paris (we’ll never know because he destroyed them), was it those heavily manipulated gum-bichromate prints (The Pond recently sold for almost $3 million), perhaps it was those Autochromes he did with Stieglitz – or the fashion work he did for Conde-Naste – maybe even some the aerial photographs he made as an officer in the war (some of those are in the collection of the Metropolitan)?

My answer would be all of the above and I would bet that his experience and/or idea of what photography was changed many times throughout his life.”

In his introductory essay, Burley writes, “All photography is about loss.”

Indeed, each day is about loss, each step taken, each hand held, peels away at some aspect of self or past or hope. Loss is a concept holding negative implications, and often it should because often it’s sad. But the necessary distinction is that it doesn’t have to, all of the time, in its entirety. As with most things both ordinary and splendid, effect and consequence rest in the crux of complexity arising from call and response, from dark running into light. The edges are where the truth rests and where loss and gain blur. And perhaps that is where we are right now in this time of transition from analog to digital.

“Regardless of what technology used to make photographs (analog or digital) I believe the next generation will make different kinds of imagery,” Burley says. “Both are being redefined by each other. In the world of light-sensitive materials artists have been freed from photography’s role as a multi-faceted societal application – it is now purely an art form and it will continue to flourish as such. In the digital world, still images will continue to be combined, embedded mixed and mashed-up with other forms of media. They will retain a connection to our idea of photography but become something else.”