The Alphabet of Light, #17, by Kirsten Rian (Chris McCaw) 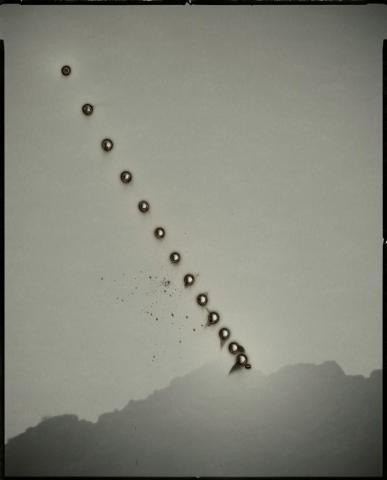 What the Sun Says

In 1605 German mathematician and astronomer Johannes Kepler presented his first ‘law’ of orbits, stating that all planets move in elliptical orbits, with the sun as center focus. Earning the title, founder of modern optics, Kepler was also the first to consider picture-making with the pinhole camera. But it was his theories on the sun’s rotation about its axis (derived without the use of a telescope) that revolutionized the consideration of time and space and our relative place within the sky.

“Discover the force of the heavens O Men: once recognised it can be put to use,” Kepler wrote in De Fundamentis, published in 1601.

And put to use, photographer Chris McCaw does, by looking up, looking outward, and 400 years following Kepler’s thoughts, catching the angle of the earth’s tilt and degree trajectory along its path, depicting that line of light in a literal way, and partnering with the sun to burn the evidence onto paper.

Using his own constructed view cameras (sometimes as large as 30 x 40 inches, built around garden wagons and converted wheelchairs, and outfitted with military aerial reconnaissance camera optics), McCaw solarizes directly onto silver gelatin paper for extended exposures. The sun at times cuts straight through, scorching the prints at its most intense spots.

The result of years of diligent experimenting and fine-tuning of process and materials, the Sunburn project had accidental beginnings.

“In 2003 an all night exposure of the stars made during a camping trip was lost due to the effects of whiskey. Unable to wake up to close the shutter before sunrise, all the information of the night’s exposure was destroyed. The intense light of the rising sun was so focused and powerful that it physically changed the film, creating a new way for me to think about photography.

In this process the sun burns its path onto the light sensitive negative. After hours of exposure, the sky, as a result of the extremely intense light exposure, reacts in an effect called solarization- a natural reversal of tonality through over exposure. The resulting negative literally has a burnt hole in it with the landscape in complete reversal. The subject of the photograph (the sun) has transcended the idea that a photograph is simple a representation of reality,  and has physically come through the lens and put it’s hand onto the final piece. This is a  process of creation and destruction, all happening within the the camera,” McCaw writes.

We discuss if this project is in part a statement on the photography industry and the medium itself, a look at where it’s been, where it’s heading. “I wouldn't say it is a study on the industry, but I would say it proves there is more potential beyond our traditional ideas of the medium,” McCaw says.

“I enjoy physically working with the medium,” he continues. “All forms of capturing and printing an image are valid. I just prefer to have more of a hand in the process.”

If a book can be soulful in its rendering of subject, then Gordon Stettinius and his team at Candela Books publishing did just that. Gorgeously and thoughtfully executed, McCaw’s new book, Sunburn, is an object unto itself. Gate folds, double page spreads, and facing images all combine with the quiet stature of single images anchoring a spread, composed in a sequence that feels paced and rendered in symphonic movements.

As the tone of the book reflects, and the imagery evidences, work that lingers, the projects that resonate, illuminate as much to the artist as to the viewer. “I have learned that life goes by fast and we tend to experience it in short bursts,” McCaw shares. “Before this project, an hour long exposure would have felt like forever. My sense of time has completely shifted. Now sitting in one spot from sunrise to sunset, a full day seems like a lunch break. It really does. And while I am there I watch a location be experienced by various people over a day. It is amazing how fast and furious we move through our days.”

These images measure the sun’s explanation for light and dark, as revealed in the axis points and angles of intersection between shadows and brightness. In the book’s afterword, entitled “Notes on Watching Shadows Move,” McCaw writes, “During all this, I’ve become attuned to the reality that we’re all running around on a spinning marble orbiting a fiery ball. It’s that simple and amazing, but we rarely give ourselves time to ponder this.”

Johannes Kepler composed an epitaph for himself a few months before he died that reads: I used to measure the heavens, now I measure the shadows of Earth. Although my mind was heaven-bound, the shadow of my body lies here.

Of McCaw’s inspired Sunburn project, photography great Linda Connor perhaps says it best, “It may have started that bright morning in the desert with happenstance, but every work that has followed has been the result of intelligence, diligence, patience, science, and an artistic heart, open to beauty and wonder. Chris McCaw has turned photography around and shown us the world anew.”

To learn more about the book or place an order, visit: https://candelabooks.com/our-books/sunburn/

Daylight was the first publisher to feature McCaw’s work. See for yourself in Issue #5.

To learn more about McCaw and his projects, visit: http://www.chrismccaw.com/Home.html