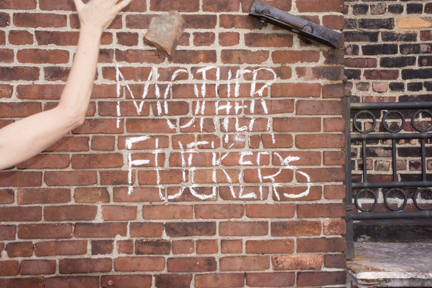 The Chelsea Hotel in Manhattan's West 23rd Street has been home to celebrity residents: from Mark Twain to Edie Sedgwick, from Simone de Beauvoir to Storme DeLarverie. Among such iconic residents is the notable Portuguese photographer Rita Barros, who has lived in the same room at the Chelsea Hotel since 1984. Barros' 1999 book Fifteen Years: Chelsea Hotel was a collection of rare glimpses into the Chelsea's interior energy: the lived spaces of artists and eccentrics, celebrities and students—each living a shared cultural moment.  Barros' book is a well-known testament to the Chelsea's creative diversity and cultural hub in the '80s and '90s.

Currently living at the hotel, Barros has picked up the Chelsea's newest narrative: one of transfer and turmoil. In the summer of 2011, the Chelsea Hotel was sold to new management. With imposing renovations began a turbulent relationship between long-term residents and new management. Under unsettling conditions, Barros has developed a new body of work about the states of harassment and unrest affecting the daily lives of remaining residents. These new works are being shown for the first time in Lisbon, Portugal, at Loja Da Atalaia Gallery. Titled Displacement 2, the exhibition features 40 colour photographs, 12 videos, and various handmade artist books.

Before leaving for Lisbon to install the show, Barros made time to show me her new prints and videos. As we discussed her plans for the show, I noticed Barros' disappointment at the obvious dissolution of a cultural landmark—the eradication of those intangible energies that reside within creative communities. And yet, the prints were amazing, her books beguiling. The show opened in Lisbon today, March 15, and from her latest correspondence this morning, the reception was enthusiastic and supportive.

What follows is an interview with Rita Barros that began in person in January 2013, and ended just this morning via email, with news of her installation.

Patricia: Let's begin at the beginning: when did you begin working on this new series of work being shown at the gallery?
Rita: "Displacement2" started Labor Day weekend of 2012, when the rooftop garden from my upstairs neighbors (which I was taking care of while they were away) was destroyed by the new owners of the Chelsea Hotel.  The anger and helplessness that I felt watching this savage act of destruction—electrical saws tearing away at beautiful plants, vases broken, boots smashing flower beds—is and was impossible to describe.  My reaction was to pick up my camera and film.  The sound of the electrical saw was important—the noise violating the ear was the key to feeling what was happening.  After this I needed to create a ritual of cleansing myself and the place. "Motherfuckers" was the first of a series of videos that I did which culminated in a video, where I metaphorically bury the garden. The early 20th century bricks of the roof have played a very important role. They not only carry the weigh of history, they are the subject of the action.

Patricia: You have quite a history with the hotel, you've been living there for 30 years. At this point in time, what is the dynamic between Chelsea Hotel residents and management?
Rita: The dynamic is non-existent. Management is doing all they can to get rid of the long time tenants. we are harassed on a daily basis. It feels like a war zone.

Patricia: How do you describe the Chelsea Hotel as a cultural hub in the time frame between your last book on the hotel and these new pictures?
Rita: My book, Fifteen Years: Chelsea Hotel, feels like Paradise Lost right now.  The hotel has been through the years a place of creativity, of meetings of the same mind, a place that I have called home and a safety net. Since it was sold in august 2011, the hotel which was and is still closed for major renovations, has been a rough place to live.  The tenants have to fight for everything (water, electricity, heating, etc) and we are treated as third class citizens (2nd class would be too fancy).

Patricia: So much of that activity is inside the building, but with "Displacement 2", you created work outside of your apartment. Why was it necessary to go outside for this series?
Rita: "Displacement 2" deals with a healing process: to create something positive out of all the destruction.  It is important that it happens where violence has occurred, and that is the reason I made work outside of my apartment.

Patricia: I think that by working outside of your apartment, the works highlight the physical condition of the hotel as the public might know it, a public beyond its residents. You experimented a great deal within your material.
Rita: It is the first time I have used video which in this project became quite important. Sound, mostly the ambient sound, became fundamental to understanding the mood of the pieces. I have also been exploring with how 'time' works differently with video. It is quite exciting.

Patricia: What was it like, transitioning from photography to video?
Rita: So far, I feel a greater freedom of movement. and I have been playing with the idea of sound as a character.

Patricia: Speaking of characters, literature seems to have an important role in your creative practice. Is it present in the work you're showing in Lisbon?
Rita: Samuel Beckett has had a great influence. The videos "Another Happy Day" and "Waiting" are very loose interpretations of his plays. The idea of absurdity and the irony in senseless situations seemed to adapt itself quite well into this new series.

Patricia: The exhibition in Lisbon features all new books, videos and photographs. I see each media informing a different facet of your project. The book emphasizes a proximity and intimacy with a space, while the videos place anxiety in a world of absurdity that would be difficult to translate in a single image. I read the photographs as the narrator's voice, while the book and the videos expand that narration.
Rita: I completely agree with you.  The videos with the rough sound, broken phrases, singing, etc., get closer to the Beckettian world of absurdity.  They show the hilarity of the situation: a mix of anxiety, irony, and dizziness. They are mostly improvised. I have an idea and get in front of the camera where things happen—my sub-conscious is in charge. In general, these works are a response to something that happened the same day in the building.

The photo books function as the story board. They ground the idea. Because they are small (5x7inches), each page turned becomes a personal and intimate experience. I like your idea of the 'narrators voice' in reference to the photos. I think the same situation  is told differently in the video and in the photos. Maybe in the videos I feel the freedom of the continuous movement whereas in the photos I feel the concentration of that split second.

Patricia: You used different media to integrate a story, in a very satisfying manner. Are people aware of the hotel's status in Lisbon?
Rita: The Chelsea Hotel is quite famous, there is a huge interest, and people have followed my daily posts on Facebook. Only today, I've had so many beautiful messages of support and that is so important to keep on doing the work. Lisbon is my hometown so more than situating the hotel here, I am showing a personal experience of a specific time and place which happens to be quite dramatic. It's my way as an artist to share my experience.

This series is the continuation of the work that I've been doing with handmade books where an action creates the development of an idea in a sequential form. And now there is video, creating another layer of understanding and locating the place in all its weirdness and absurdity. I just came back from installing the show and it is so amazing to see all the photos framed on the walls and the video loop going on. I am still a bit overwhelmed and I believe it's quite a strong  presentation to bring my ideas across.