Exhibition Review: Leigh Ledare – You Are Nothing To Me. You Are Like Air. (on view at Rivington Arms thru Oct. 25) 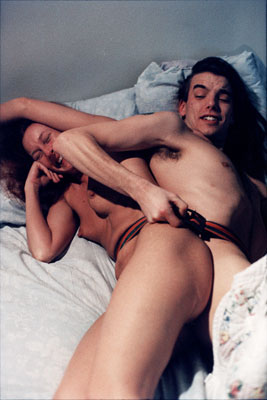 Leigh Ledare's solo show at Rivington Arms (which was at Andrew Roth Gallery in a different permutation earlier this year) is comprised of photographs, video and mixed media works that are mostly related to his unusual family life. Taken from the accompanying monograph Pretend You’re Actually Alive, the Oedipally-charged work in You Are Nothing to Me. You Are Like Air. largely focuses on depictions of the artist’s mother, a ballerina turned stripper. She often appears before Ledare's lens in various states of undress, sometimes even in bed or in flagrante delicto with one of her significantly younger lovers (though never, it should be noted, with Ledare himself). Also included is a selection of somewhat less prurient self-portraits that the Ledare has produced in collaboration with older women that he has found through their personal ads.

Both in style and substance, Ledare's work will inevitably evoke comparisons to the work of Nan Goldin and Richard Billingham, as well as, to a lesser degree, Wolfgang Tillmans and Boris Mikhailov. In this regard, it should come as a surprise to no one that Ledare once worked as an assistant to Larry Clark. Knowing this, it is tempting to ensconce Clark in the vacant corner of Ledare’s Oedipal triangle (his biological father is absent from the show), though his work seems to want to usurp Clark in the mode of the sensationalist Teenage Lust or Kids rather than the more masterful Clark of Tulsa.

Precedence aside, the images are raw, occasionally beautiful, and sometimes shocking both in their honesty and their perversity. Unfortunately, the mixed media and video works, the latter which is comprised of footage from a discarded softcore spanking video project that Ledare tried to make with his mother and some family friends, seem like afterthoughts, more a product of his Columbia University MFA than of real passion. That said, it can’t be denied that the show does pack a punch, both emotionally and aesthetically.

The problem, ultimately, is how deeply—and for how long—that punch will resonate. Ledare is dealing directly with a taboo of mythic proportions, and while he does not break it as such, he does come close enough for discomfort. As shocking as this particular aspect of their mother-son dynamic is, however, the fetishistic attention to the taboo ultimately robs the work of true psychological depth. This is to say: Freud taken literally is not that interesting. The Oedipus Complex is germane to the understanding of psychological life not so much because it delimits taboos, as Ledare seems to have it, but because it traces the often destructive topographies of power and desire: our insurmountable impotence in the face of the Father, and in the face of the Mother, our unslakable desire to fill the hole left by the loss of some infinite thing.