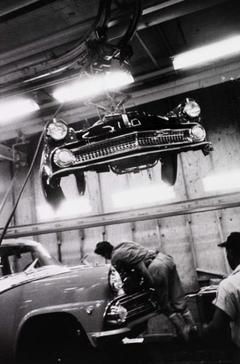 I happened to be in Detroit at the end of March on an assignment for TIME magazine, staying at “The D,” Time Inc.'s Detroit home base for a year-long journalistic commitment to the complicated city. I picked up the weekly rag of clubbing and nightlife, which seemed stocked full of partying not so much right downtown, but just barely out there in the suburbs. I was sort of surprised to find such a paper, as I had been, on my own, exploring the new “urban prairies” and very desolate, demolished parts of town. From what I’ve read, it seems he city has lost 1.3 million residents since its peak in the late Fifties. so some areas have returned back to some semblance of nature. I surprised two pheasants and one fox in my wanderings. Once-much loved and busy schools are now shuttered, and traffic lights at some intersections still hang there, but turned off, so as to not waste electricity. They have been replaced sometimes by the far “greener” stop sign. It’s all very difficult to comprehend. In the paper, I happened to notice a small reproduction of a grainy black-and-white photo of a car front-end hanging precariously above a worker. I read the accompanying text, and was thrilled to read that there was currently a Robert Frank show at the DIA, the Detroit Institute of the Arts. It was not just any Frank show, but a rare showing of 60 photos that he made while stopping in the Motor City on his 1955 road trip across the US. You’ve seen some of these pictures before: The black kids cruising in the convertible.  The factory line at the Ford River Rouge Plant. The Orange Whip lunch counter. The drive-in theatre.

Those photos, plus a few others, are among the 8 pictures in the iconic book, The Americans. That last one, by the way, is the Gratiot Theatre. A woman at the museum was telling her husband about remembering her going there as a child. I heard her say “Gratiot,” a street name I recognized from my driving around town. A lightbulb went off in my head – that backwards, half cut-off script above the screen says “Gratiot,” not “Capitol,” like I had always incorrectly assumed. Take a look at it. It ends with a “t” not an “l,” duh. The other 50-odd photos you’ve never seen are mostly from the Ford automotive plant, as well as some of the bus (which some automotive employees took to work, ironically), the street, the parking lot and of the photographer’s broken-down car, which was, you guessed it, a Ford. Wall text says that he had to take the bus around town because of this fact.

A side note: Some of my interest in the city comes from the fact that my family ran a junkyard for over 50 years, so I grew up with cars at the end of their lifespans, not at the beginning, which was the world-view people in Detroit once grew up having. A common saying in my dad’s garage was “Ford: found on road dead.” Or, “Ford: fix or repair daily.” The fact that Frank’s Ford broke down made me laugh out loud in the otherwise quiet galleries. Visit http://lisakereszi.com/joes-junkyard for some of the junkyard pictures.

The factory photos made me think a bit of Lee Friedlander’s pictures that were put together in his At Work book, taken for annual reports and such of workers in factories and in bland offices. But Friedlander’s are tack-sharp and lit with flash, whereas Frank’s, though taken with the same Leica camera, are just what you’d expect – gritty, dark and full of motion and emotion. Both ways of technically approaching the subject end of saying much the same thing in the end, because they are just two different ways of showing workers dwarfed by the machines that they use to make more machines.

Frank’s instinct was dead-on going to Detroit in search of America. The car was king, and he hit the road right when everyone else was doing the same thing. The exhibition is not just a reminder of the city and the company that once was, but also makes us look at how they/we put all our stock in one barrel, an easy thing to think when hindsight is, well, you know. When I was out towards Dearborn for my assignment, my guide showed me an overview of the Rouge plant, which is, in fact, rouge. He told me that only part of it is still used to make the steel for Ford, and that the bulk of the property was sold to a Russian company.

The prints in the show come from a DIA purchase many years ago, as well as a few larger ones from the collection of Frank himself. Unfortunately, there is no catalog, no announcement card and no photos allowed in the galleries. Fortunately, the museum has a blog with a few great posts about the show: http://diaphotography.wordpress.com/ So, you need to get on a plane (or, better yet, in a car) and get yourself to Motown before July, when the show comes down. There is also, fittingly, a wonderful Diego Rivera mural of workers from 1932 as you enter the Frank show, as well as the fantastic collection I unfortunately had to rush through.

For more information on Time Inc.’s project:
http://www.time.com/time/nation/article/0,8599,1925681,00.html
If you are looking for a guide before you go, check out this post:
http://www.designspongeonline.com/2008/01/detroit-design-guide.html
for some great ideas of where to go. It was compiled by the Detroit blogger, father and photographer, Sweet Juniper. That is, use it if you don’t mind seeing the same couple in a silver Prius keep showing up at the same sites and driving right, smack-dab, into the center of your frame. It keeps you humble, and reminds you that you are not alone.