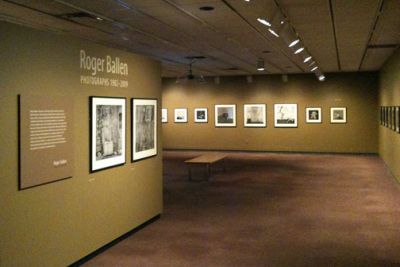 A twisted tornado of wire whirls just above the cowering head of an old man in a black and white photograph that is one part magic and one part death; It was taken by Roger Ballen in a building called the Shadow Chamber in the far corner of the cement basement halfway around the world.

Ballen, a photographer from Johannesburg, South Africa, creates a fragmented reality in which fact and fiction are equally elusive. His current exhibition, featuring 74 square black-and-white prints, is on view at the George Eastman House in Rochester,  New York through June 6 . The images on display predominately come from Ballen’s most notable monograph, Shadow Chamber (2005) and his newest work, Boarding House (2009).

The Shadow Chamber is a deserted industrial building in South Africa inhabited by transients and local laborers. Within its walls all time and cultural contexts are lost, setting the stage perfectly for Ballen’s dark mischief. Though the level of direction is unclear, there is a playful interaction to the otherwise disturbing imagery that leads one to think; what, exactly, is going on here? Is this a dark social commentary? Are these meticulously placed objects in a thoroughly thought-out tableau? Or, is this real?

In a recent lecture at the George Eastman House, Ballen danced skillfully around all of these questions, and kept the audience rapt in his unique narrative that is comedy and tragedy, and defies common photographic tropes. The story being told is about a singular slice of time, in which all of the connotations of poverty, politics and history in South Africa are momentarily culminated and personified by an odd-looking man blankly staring at two puppies in small cages in a dingy room.

Ballen, who is a trained geologist, is an excellent speaker. His cryptic delivery and concise statements at times sounded absurd, but constantly had the audience on the edge of their seats. He described his process of a growth and discovery as an artist as sort of an uncovering of how he perceived people and places. His travels and experiences in Africa seem to have allowed him to mine his own psyche and “cross the chasm” from documentarian to artist.

The most recent work in the exhibition is from his new monograph, Boarding House (2009). The Boarding House, as Ballen mentioned in his talk, is located almost adjacent to the Shadow Chamber Building.  In this series, we are again taken to a dark corner of his world, only this time the people in the images have faded into, and now blend in with the background. Hands and mouths become texture-elements and creep in from the edges of the square frame with equal visual impact to doll’s heads and mangles of wire.