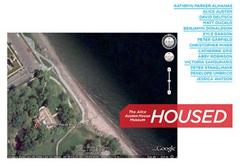 Next weekend, make the trip out to Staten Island to visit the Alice Austen House, a waterfront old home-turned museum on a park overlooking the NY Wayerway and across to Brooklyn. Alice Austen was an early American female photographer, and the home was saved by preservationists: Clear Comfort (a.k.a. The Alice Austen House) was built in  1690. In 1844 it was purchased by John Haggerty Austen, Alice's grandfather. She moved there as  a young girl in the late 1860's with her mother, Alice Cornell Austen, after the two were abandoned by Alice's father. She  went on to spend most of her life there, until financial problems  and illness forced her to move in 1945. In her absence, the  house fell into disrepair until a group of concerned  citizens  saved it from demolition in the 1960's. The house successfully  gained status as a historic landmark, and was restored in  the mid 1980's. It currently serves as a museum of Alice Austen's  life and times. (from http://www.aliceausten.org/house/index.html)
The NYT wrote about it last year, as Paul Moakley, a photo editor, is the caretaker: http://www.nytimes.com/2009/12/20/realestate/20habi.html?_r=1


The opening is on a Sunday afternoon, and is a great excuse to visit, grab a cocktail and enjoy the lawn and view.

HOUSED draws from Maida and Murray’s ongoing dialog with fellow photographers and video artists who explore fresh approaches to the subject matter of home. The individuals included in this exhibition are successors to a generation of American artists whose photographs interpret social, cultural, and political events through the restaging of personal occurrences in suburban living rooms and backyards. While this previous generation depicts the literal stage and accompanying narratives of domestic life, the artists in Housed present a more analytical approach to the American home. HOUSED contextualizes the works of thirteen living artists by exhibiting them, alongside the work of Victorian-era photographer Alice Austen, in Austen’s historic home on Staten Island.

This exhibition is accompanied by a critical essay, “A Guided Tour,” written by Susan Bright and made possible by the generous support of Dear Dave Magazine.

Joseph Maida and Katie Murray met as graduate students at Yale School of Art in 1999 and are on the faculty, along with Susan Bright, at the School of Visual Arts in New York City.

For further information about HOUSED, or to obtain writing or images, please contact the Alice Austen House Museum Curator, Paul Moakley, by telephone at (718) 816-4506 or send an email to housedtheshow@gmail.com.