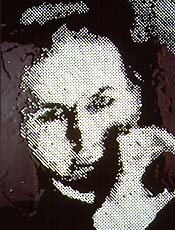 Houdini: Art and Magic at The Jewish Museum 1109 Fifth Avenue (at 92nd Street) New York, NY 10128 October 29th - March 27th, 2011 Artists include, Matthew Barney, Vik Muniz, Raymond Pettibon, and also ephemera on display, which includes historical photographs and films as well as posters and original props. The audioguide is worth a listen, narrated by Neil Patrick Harris, with commentary by the curator, as well as magician David Blaine, and Vik Muniz speaking about the confluence of art, photography and magic for the entry about his piece: "Houdini, Pantheon," from his "Pictures of Ink" series. He says, "If you think of Houdini as a man of art, you have to think of him as a man of science. As most artists in the past, he is always working at the edge of technological development. He knew the latest thing that was invented in technology. That’s why I think when you see interesting magic today you have to think about films, imagination. That is the continuation of Houdini’s legacy.”http://www.thejewishmuseum.org