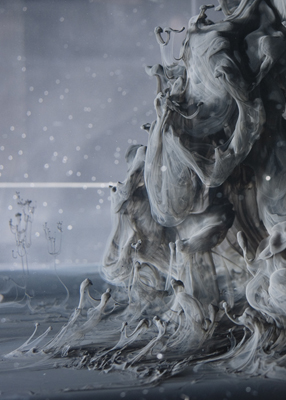 This Thursday, Pierre Le Hors will be presenting new work, "Alikeness", and also celebrating the launch of his new book "Firework Studies", published by Hassla, at Ed. Varie. The show will feature several small C-Prints, gorgeous images of fluid displacements, and a sculpture. Le Hors wrote the following about the show. "Alikeness is about the impulse to halt time and to preserve, to give permanence to something before it slips away. The group of photographs shown stop motion in order to more closely observe a phenomenon. Likewise, a wax effigy is presented as a record of the artist's body, with funereal implications -- a likeness of youth as death mask (is the figure dead or asleep?). Alikeness is the instant at which a representation (of life, of movement), charged with potential but frozen in time, slips uncomfortably into memento mori." Concurrently, his book "Firework Studies" will make its debut. Over the three hundred plus pages, stark black and white renderings of fireworks shot against the night sky move between spherical explosions, digital noise and clouds of debris. Ed. Varie 208 E. 7th st. West Storefront NYC, NY 10009 Thursday, January 20th, 6-9 pm Pierre Le Hors: http://www.pierrelehors.com Ed. Varie: http://edvarie.tumblr.com/ Hassla Books:http://www.hasslabooks.com/