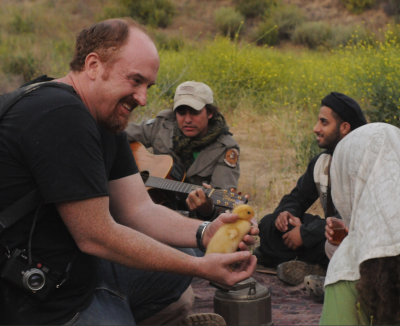 Twice this week, I was with different groups of "emerging" photographers (if you will) and talk wasn't centered around our chosen medium, but instead around comedy. Actually, discussion wasn't at all about comedy in general, but about just one comedian in particular, Louis CK (born Szekely). It seemed an odd coincidence, and I wondered aloud what this zeitgeist might be about. One photographer offered, "Well, it's like he does with comedy what we do with photography." I thought for a while about this, not having had the time to ask him to elaborate. It was nagging at me, and I finally figured out what he might have meant when, just a couple days later, I happened upon (zeitgeist? or mere serendipity?) Louie's Comedy Central special, "Hilarious". Perhaps we're reacting to  something about taking the mundane, the everyday crap of daily life, and making us notice it, making us realize that something we accept readily is not quite right, or not seen consciously enough. He is unafraid to take something we accept, turn it on its head, and show us how insane we are as a culture, or as partners in a relationship. He takes something everyday, and twists it, transforms it into something else, a statement, comedic poetry. Not unlike photography. It appears unfiltered, but that is part of the trick, the craft. And it's not pure comedy; it's mixed in with representations of his reality that are shocking, sad and depressing, also like good photography can do. One episode, "Country Drive" featured a too-long bit with him singing in the car to The Who. It was more like a piece of video art than a chapter in a tv show. The episode where he sees someone get hit by a car is viscerally shocking and upsetting to a viewer, and it made me uncomfortable, like I have felt when experiencing something tragic myself, or when looking at a great piece of art that is designed to do the same thing.

But why is this worth a blog post here? I remembered hearing that the comedian happens to be a photography enthusiast, and that he was sporting a Leica a couple of episodes ago on his FX show, "Louie". If you dig deeply into his website, you will even find a how-to post by him, touting prime lenses and explaining the pluses in shooting with manual equipment, analog, even. He doesn't say anything a profgessional photographer doesn't know, but he's nto speaking to us, but to the masses - the hordes of iPhone-photographers who couldn't calculate an f-stop from scratch to save their lives.  Ironically, the piece is from a 2-year old post from when he actually did a USO tour in Afghanistan, the trip that is recreated in the recent episode. The Leica he is carrying is no prop, but a bit of verisimilitude, actually. Read it here: http://www.louisck.net/2009/03/uso-tour-weblog-kuwait-iraq-af.html To see one of his bits about the failures of our society to appreciate the wonders of our contemporary world, known as "Everything's Amazing and Nobody's Happy": http://www.youtube.com/watch?v=8r1CZTLk-Gk

I wonder which photographers he likes the best? A complicated, game-player with a wry sense of humor and sharp criticism, like Lee Friedlander or Garry Winogrand? A piercing portraitist, like Diane Arbus, whose subjects held a mirror to her own, complicated being? I'd say those are three pretty good guesses.