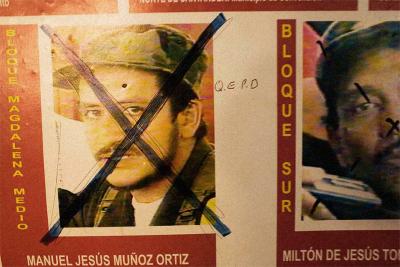 Stephen Ferry has won the first annual Tim Hetherington Grant for his project "Violentology: A Manual of the Colombian Conflict." Ferry has spent over a decade working on Violentology, an exploration of the dynamics of the conflict in Colombia and its impact on civilians. With support from the Audience Engagement Grant from the Open Society Institute, and with the goal of reaching as many Colombians as possible, Violentology will be disseminated as a book, an exhibition (images can be wheat-pasted or taped onto walls), and booklets (free PDFs of selected chapters from the book that can be widely disseminated to rural areas).

TEDtalk with Stephen Ferry: presenting Violentology as "a potential model of grassroots journalism and an alternative to commercial media."

The Tim Hetherington Grant, a joint venture between World Press Photo and Human Rights Watch, and supported by Hetherington's parents, awards € 20.000 to a photographer to complete an existing project focusing on human rights. The Grant looks for "work that operates on multiple platforms and in a variety of formats; that crosses boundaries between breaking news and longer-term investigation; and that demonstrates a consistent moral commitment to the lives and stories of the photographic subjects."