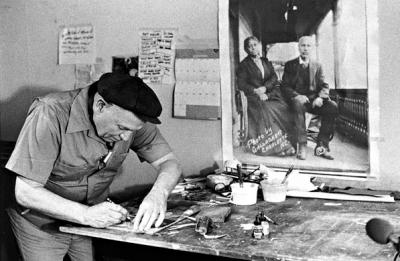 I cannot recall the first time that I saw Romare Bearden’s work, but I can definitely recall the last. It was an unforgettable evening just two months ago in Charlotte, North Carolina at the Mint Museum (its uptown location) during the opening of Romare Bearden: Southern Recollections. This exhibition will set sail in January 2012 from the Mint Museum to the Tampa Museum of Art (Tampa, Fla) and arrive at the Newark Museum (Newark, NJ) in May 2012.

For those of you that do not know who Romare Bearden was (and I hope that you are few) and have no clue as to the enduring legacy of his work, this is your lucky break-------listen up.

September 2, 2011 marked the centennial year of Bearden’s birth. To celebrate the life and work of one of the most important artists of the 20th century, museums (and other institutions) across the country are mounting exhibitions and launching programs through September 2, 2012. The Studio Museum in Harlem has launched The Bearden Project as well as created a website with information about Romare Bearden and other happenings in regards to this yearlong celebration. Go to www.studiomuseum.org  for more information.

Much has been written about Bearden’s travels and his life in New York-especially his time in Harlem but he was born in Charlotte, North Carolina and the South (especially Mecklenburg County) was like a North Star for his artistic practice. He never lost sight of her rituals, landscapes and people. These images would become the foundation of a practice that combined influences from the European avant-garde with the aesthetic traditions of the African diaspora. In Bearden’s paintings, prints and especially his masterful collages, the American visual archive is appropriated and re-inscribed with all manner of genius and power.

In the 1960’s, Romare Bearden began a serious investigation of collage and in doing so, he created his black-n-white Projections made from collaged, readymade photographic images that he enlarged using a Photostatic process. This process allowed him to shift the scale of his works as well as allow images to appear seamless causing an even greater marriage of the disparate, engaging bits and pieces of his work. He was also able to make multiples of works and repeat the organizational structures of his iconic collages. The use of repetition would become one of several Bearden hallmarks.

My favorite of these Projections is entitled Mysteries, a 1964 Photostat mounted on fiberboard that measures 28 ½ x 36 ¼ inches.

So, its Romare Bearden’s birthday ALL YEAR LONG and you are invited to the party, so please attend. Go to a location near you and L-O-O-K, then look again at the work of this American master. Happy Birthday Romare Bearden!

The following sites will keep you updated with the latest information on this yearlong celebration: