The Alphabet of Light, #2, by Kirsten Rian 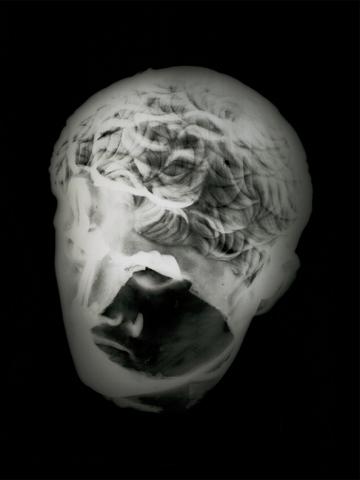 The Alphabet of Light

I played in a band for 15 years with a brilliant guitarist nobody’s probably ever heard of. He used to say the best songs and best songwriters will never be heard. The world’s best guitarists are noodling around in their basements with some Fender amp tweaked up, bending notes through hot-wired distortion and wah pedals that would defy Hendrix.

I believed him then, and I believe him now. And I think this idea transcends mediums and extends to any and all creative fields, including photography. And while to some extent I don’t like this idea that the most singular and elevated translations of thoughts and interior space are most likely not gracing the eyes and ears of all the rest of us, I essentially choose to remain motivated and inspired by knowing at least they’re out there somewhere. The fully-realized, originally-conceived and soulfully executed photo projects exist whether or not I see them. The issue to me is one of trust.

And the thing is, maybe my life is just particularly graced by a lot of compelling artists, but I also actually see incredibly mindful work that keeps me believing in this medium. Photography is not in a crisis, for heaven's sake. There's no stasis any different than the kind of stasis in 1974, in 1988, in 1996, in 2012, or any other random year...every single creative medium is perpetually in a state of quasi-stasis--it is plum difficult finding creative thinkers capable of producing original songs, paintings, poems, essays, and certainly photography. It has been this way since the beginning of time. But original artists and lingering images do come along. And they resonate. This very ‘history’ that is criticized is in itself a tool of reference: has there ever been, say a decade period of time in the past 200 years, with an utter absence, a void, a complete mssing in action of growth in vision, without a handful of stand out photographers who’ve stretched the definition of photography and done so using whatever tools at hand at the time?  The tool of the medium can’t be blamed, the digital realm and all the gadgets that come along with it. It's the brain behind the tool that's composing, reflexively selecting the moment to hit the shutter, and frankly those brains are hard to find. Thus, it feels stagnant sometimes. But we all must believe in something, intangible or otherwise, about this dang field otherwise we wouldn't keep producing images and writing about them.

Yes, this is an art conversation, not exclusive to photography. No period of time and no artistic medium is all at once static or all at once an eruption of brilliance. It’s both all the time. And that’s why we make art and that’s why we keep opening the books of the artists we appreciate and that’s why we value risk and expansiveness, because we realize how rare it is. But rarity is not the same as absence.

“...how can we turn around, to look at and move into the future?” was recently asked by the ever-thoughtful Jörg Colberg. By referencing history to trust that it’s there. Substantive. Present. Ready. At times even more complex and layered than it was 50 years ago. Better? In parts, and not in others. Will we still be needing to slough through images reflecting latest media trends and mfa regurgitations and forgive me, but please shoot me now if one more earnest photographer plops down their portfolio and tells me they’re exploring how the interior and exterior spaces interact? Yes. We will still be plowing through all that. But as always, the great work, the masterfully rendered photograph spilling story and multiplicity of thought and emotion will be there, too. It’s up to us to believe it’s there, to try to find it, or hell, make it, using whichever tools we choose to augment the box and glass and light contraption we call a camera.

Compelled and curious by this query at hand, I asked a few of my friends whose image-making I respect to respond to my question: What state do you feel photography is in right now? The responses I received were beautiful, at times riveting, heartened. Stay tuned, more artist responses and conversation around this subject to follow next week, but here are a few.

By Kirsten Rian, with the following byline, also a response to Colberg’s piece: painter; writer; photography curator who doesn’t often get paid for her work but who does it anyway; editor and sequencer because God bless ‘em but sometimes photographers are freaking hopeless at editing their work; and gulp, working jazz musician (and if you want to talk about conservatism try being on a three hour gig with non-improvising, music-reading-tethered people calling themselves jazz musicians. It’s so far past painful I have to stop here or this will turn into a rant of vast proportions).

“Last week I read "Black Box," a powerful, and haunting new story by Jennifer Egan published in The New Yorker . Since I am apparently somewhat of a luddite, and I relish the feeling of paper in my hands, I subscribe to  the magazine in paper form, rather than reading it on a laptop or a sleek iPad. Later, I learned that Egan had written the 8500-word story to be released on Twitter, and it was indeed released one tweet at a time, with the 140-word limit imposed by this form. The story was brilliant not because of this limitation, and not in spite of it. It was integral to it, yet the story also stood alone, as a potent work of fiction.

When the typewriter or, decades later, the word processor was invented, did it negatively impact the work of essayists, fiction writers, playwrights? I doubt it. The constraints and possibilities placed on a medium contribute to what artists can do in a positive way.

In the past century, as film and lenses got faster and cameras got smaller, street photography and photojournalism were impacted and enabled. Likewise, perhaps the f64 group that preceded would not have existed had it not been for the limitations (or, simply, innate characteristics) of slower films and larger cameras.

The limits of photography have always existed in a changing, fluid dynamic form. Cameras, lenses, papers, films, and, yes, digital technologies come and go. They are the current on which photography rides, but not the substance of what makes a photograph a worthy work of art.”

“I'm the wrong person to ask  -  I would much rather get out my Sudek or Strand or Renger-Patzsch books for the thousandth time, while grumpily yelling at modern/post-modern art and photography to get off my lawn...”

(and here is a link to the Colberg posting I reference: http://jmcolberg.com/weblog/2012/06/photography_after_photography_a_provocation/)