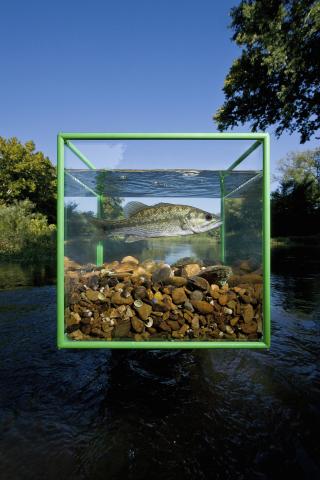 “This is really about looking closely at a small place, about showing how complicated, lovely, and connected, all the things in the world might be,” David Liittschwager tells me one afternoon on the phone.

He’s discussing the process up to creating a book for his A World in One Cubic Foot project that originally appeared in National Geographic in February, 2010. He’s on speaker phone and doesn’t know I take a ruler off my desk, stand up, and discover that my feet, spaced at a comfortable distance apart, take up about 12 inches of space on this earth.

His essay for the book is entitled “A Lap-Size Sample” and begins, “This book started with a question: How much life can be found on a small piece of the world, in just one cubic foot, over the course of a normal day?”

It occurs to me this is a question to put on a post-it note above one’s desk, to consider daily on a literal or metaphorical level.

The answer, it turns out, is quite a bit.

Visionary biologist, researcher, and theorist E. O. Wilson wrote the preface for David’s book. Wilson’s work is known to focus on the interdependency of all things, large and small, and he’s the leading expert on ants. He writes, “When you thrust a shovel into soil or tear off a piece of coral, you are godlike, cutting through an entire world.”

The mathematics of chance with each footfall. Fieldnotes of things lost and found in the dirt on our hands. Here, wherever here is. And mostly, that everything, every speck of flora, fauna, action, interaction, everything and everyone understood, misunderstood, known, catalogued, and yet to be discovered is of value and affects the other.

E. O. Wilson continues in this vein in his foreword, “If all the organisms were to disappear from any of the cubic spaces depicted in these photographs, the environment in it would soon shift to a radical new state.”

For the one cubic foot project, David constructed a 12” cube made from quarter-inch stainless steel, creating as he called it, “a miniature photo studio” in which he watched, counted, measured, and photographed “as precisely and faithfully as possible, every creature found in the cube.” He, his camera, and said cube travelled the world and the book includes a look at six ecosystems: Central Park in New York; Table Mountain National Park in South Africa; Costa Rica’s Monteverde Cloud Forest; a coral reef in Moorea, French Polynesia; under the Golden Gate Bridge in San Francisco; and the Duck River in Tennessee.

David tells me about saying to himself while working on this project, “Stay very close, this is cool, don’t step on the thing you want to use...because even if you stop at just a tenth of a millimeter, you’re still just scratching the surface. There is still so much more.”

David looks for everything we whir past. He’s made a career out of watching and noticing, out of relaying through imagery that every single minute detail matters. We all know how to stop and peer at the world underfoot, we just don’t usually.

I ask David where his love of the natural world was rooted. “I think my conversion occurred while helping to photograph a San Joaquin Kit Fox, an endangered species, in 1986,” he replies. “The same thing that made me, made this creature, too.”

His photographs are a promise that belief vested in both the seen and unseen is warranted. That the patch of grass in our front yard holds the story of our lives as much as the landscape inside our kitchens at dawn. The happenings in a handful of soil, the ecological and biological continuing-on day after day is perhaps one of the few aspects of this ever-changing, oft-disappointing world, we can count on.

David Liittschwager's book A World in One Cubic Foot, published through University of Chicago Press, drops in stores this October. Information may be found at:

And a selection of images from the original National Geographic spread are at:

David’s site is at: