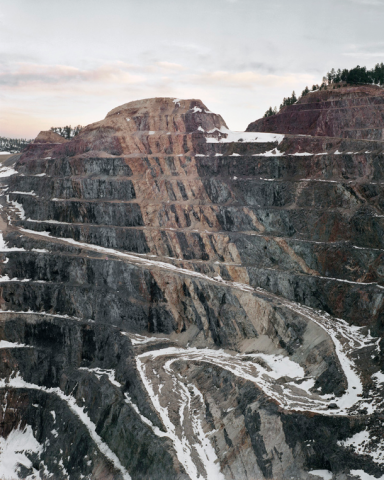 The American Dream, a term coined by James Adams over half a century ago, has gone through many manifestations and produced a variety of Americas, some of which are more apparent than others. Bryan Schutmaat, a recent graduate from the Hartford MFA program, has shouldered the task of understanding a less known side of America. He goes into the heart of the country, into places once romanticized as open frontiers of liberty and prosperity and documents the reality of what they have become.

In his newest series, “Grays The Mountain Sends”, one gets a glimpse into the byproduct of America’s dreams. Pensive, distant portraits mirror cold and barren landscapes and ultimately a world that has moved on to fulfill other dreams.

With a background in history, Schutmaat aims at approaching America with an objective mind, yet a discerning eye. The photos are simply a response to the land and times Schutmaat finds himself in, and a desire to relay to the rest of the world the real people who inhabit it.

“Grays” follows in Schutmaat’s tradition of depicting the America held outside of the spotlight, though departs from the more “roadside” approach seen in earlier works.With a more personal focus than previous photographs, one can sense a desire to relate to the subjects. The viewer can only muse about the America of today and how it so blindly pushes so much of itself out of view in order to hunt down new aspirations.

The lore of America is still fresh in many minds, however. America is still characterized as being the land of unbounded potential, of a place that promises prosperity and freedom. Although much of America is clouded in modernity, there is still also the promise of expansive wilderness, plentiful fields, and rural communities that border the untamed. In a way Schutmaat presents the viewer with a land that American’s may still feel exists but do not see, and does so with no indictments.

The series is named after an excerpt from Richard Hugo’s poem, ‘Degrees Of Gray In Philipsburg’. It is in many ways an effective response, though he says his portrayal of the American West is much more tender than Hugo’s. The series ends with an excerpt from writer William Kittredge’s essay, Heaven on Earth, and the image of a young woman, her face hidden by red hair. The essay from which the excerpt is taken muses about the ideal of a western American paradise still never realized. Coupled with the image of the solitary, red-haired woman, Schutmaat softens the tone and implies a sense of hope still left in the heart of America.

Say your life broke down. The last good kiss

you had was years ago. You walk these streets

laid out by the insane, past hotels

that didn’t last, bars that did, the tortured try

of local drivers to accelerate their lives.

Only churches are kept up. The jail

turned 70 this year. The only prisoner

is always in, not knowing what he’s done.

is rage. Hatred of the various grays

the mountain sends, hatred of the mill,

who leave each year for Butte. One good

restaurant and bars can’t wipe the boredom out.

a dance floor built on springs—

all memory resolves itself in gaze,

in panoramic green you know the cattle eat

or two stacks high above the town,

for fifty years that won’t fall finally down...”

To see “Grays The Mountain Sends” and other works by Bryan Schutmaat here: http://www.bryanschutmaat.com/