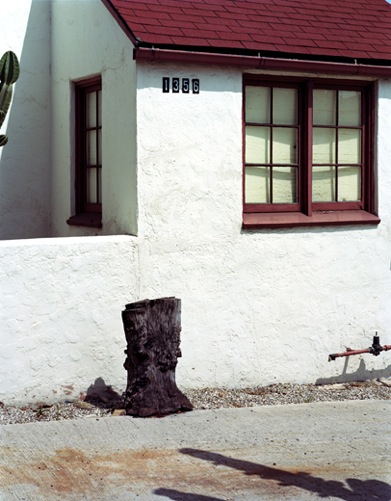 Bay Area photographer Ace Morgan's full frame film shots honestly and unabashedly portray the world that surrounds him. From the Bay Area punk scene, to LGBTQ rallies, to drug addicts and serial killers, from San Francisco to Detroit and beyond, Morgan's approach lacks pretense and artifice - the grit is almost palpable in his frames.

His first New York solo show, which opens tonight at Strange Loop Gallery offers a panoply of pictures from over twenty-six years of documentary work.

I had a chance to ask Ace a few questions via email the other day about his work, Kickstarter, punk and community.

JL: Where are you from originally?

AM: I am from Michigan. I was born in Pontiac, and lived in Waterford and Detroit before moving to the Bay Area, where I have been for 20 years. 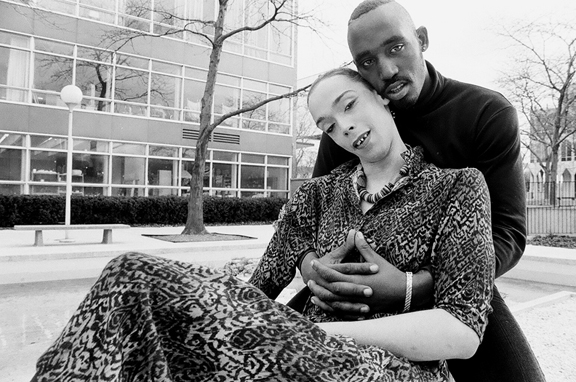 JL: So when did you get into photography? What inspired you to pick up a camera and start shooting?

AM: I bought my first disc camera in 1983. My photo class in high school is where it all started. My photo teacher entered my work in a contest and I won first prize. I hated school, and photography was the only thing I liked in high school. I was going to punk shows in Detroit, photographing my friends who skate boarded. I picked up my camera because I loved the technical part of it, you could get lost in the darkroom,  I loved stopping time, and I had the coolest friends. I knew we were apart of something big, it was the 80's.

JL: Would you say your work focuses mainly on punk music and queer culture?

AM: My work focuses on what’s happening around me, and the punk movement and the queer scene is a part of my life. I was a part of a place in Detroit called 404 willis - it was like community center. I was documenting everything going on there- East Bay bands came through, chumbawamba played, Tribe 8, spitboy, Econochrist. I moved to California because it was such a great combination of queer and punk. The Detroit punk scene was so tough…I was a peace punk. 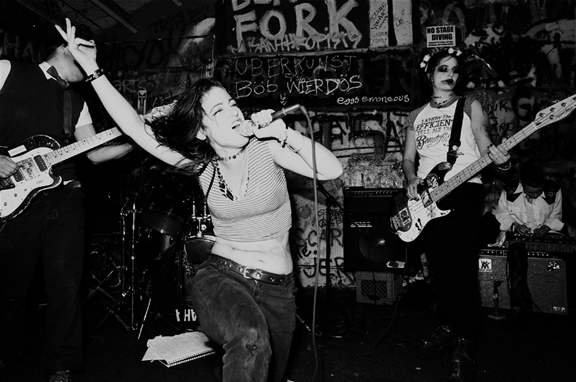 JL: Your photos of the punk scene provide a great archive of a time that wasn’t as highly documented as all aspects of the music scene are today. It’s fun to revisit Tribe 8, Neurosis, Tragedy, Limp Wrist, the Need, the Quails, Le Tigre. Is this the main focus of your NYC show?

AM: The focus of the New York show is made up of a few bodies of work. I accidentally photographed the Woodward Corridor serial killer- there are a few images in the show from that, there is a lot of work from Detroit... There are images from a drug addict from Flint, MI named Wiz, a great image of my friend Sherik holding a donut on a stick in front of a bunch of riot cops when they refused to hire gay and lesbian workers in 1990. The oldest image in the show is from 1989- my sister at an abandoned drive-in.

JL: Any other shows coming up after this one? What are your future plans for your photographic work?

AM: I am looking to show my work in the Bay Area in the next 6 months. I am also looking to put out a book of my work, 26 years of it.

JL: And your show tonight (May 9th) at Strange Loop Gallery was funded entirely by Kickstarter?

AM: Yes! This show was made possible by the Kickstarter campaign. My work is about community, and community made this show come to NY. 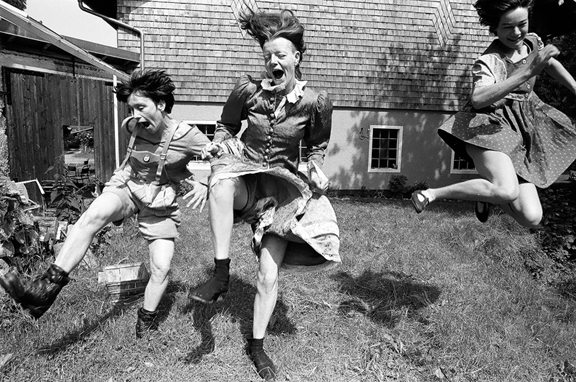 JL: And one final question. Can you describe the differences you’ve noticed between the Bay Area punk scene back in the early 90's and now?

AM: The Bay Area punk scene in the 90's was a movement that really was its own. (It had a) West coast vibe, there were more feminist punk bands then there are now, it was a peace punk movement- you can not compare today to then, although you still have your patches and pins and spikes. The Bay Area today is also one of the most expensive places to live, and that drove out a lot of people in the mid-to-late 90's (the dot com era)… The music scene is so different today because of downloads. I worked at Mordam Records when the download thing was knocking on our door- the door of a warehouse full of records- it changed the music scene…We were doing more with our hands back then. You had to go to Kinko’s to make a zine and layout your 7" cover… You had to make flyers for shows. There was more contact with people, to get the word out about things, more physical footwork. Now you can send information to thousands with the click of a button…

Jaime Lowe is a writer and photographer.